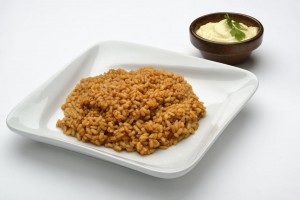 Our broth for “arroz caldero” is tasty enough by itself and does not need to be enriched, just serve. Traditionally in Murcia, it is served with garlic mayonnaise commonly known as “aioli”. This is not supplied in the pack because the best need to be kept refrigerated between 2 and 8 degrees. Our product can be stored at room temperature and is on different channels. But this is our first suggestion presentation, almost mandatory: served with “garlic” or aioli. 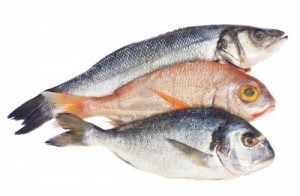 In restaurants, it is common to find “arroz caldero” accompanied with the fish used to make it. This is not entirely true, the fish is usually discarded and instead what you do is cook other fish, usually mullet del Mar Menor, in the same broth. Caldero can be eaten alone, without the fish, in fact often returns to the kitchen without being eaten, but for those who want a second dish, we have the following suggestion: During the last four minutes of cooking, place on top of the rice a couple of fillets of sea bass, bream or mullet. Those four minutes are enough to leave a very tasty fish dish to accompany the rice.

EL CALDERO is designed to prepare arroz caldero, however, thanks to its intense flavour of fish and peppers, it can be used as a base for other rice or fideua dishes-

Rice with lobster for 4 people:

In a paella pan fry a red pepper in 100 cc of oil, add two or three tablespoons of tomato sauce, add 440g of rice and give it a spin. Next add a jar of EL CALDERO and three parts water (the same as the jar three times). We take this broth to a boil and add three or four cloves of sliced garlic. Then we place the lobster on top, sliced open, and other seafood as desired: shrimps, prawns, squid, clams … no need to spend much, we made it with peeled shrimp and clams we had in the freezer. Season to taste (hint: salt, a pinch of white pepper, chopped parsley and garlic powder) and simmer 15 to 20 minutes to consume the broth. Spectacular!. 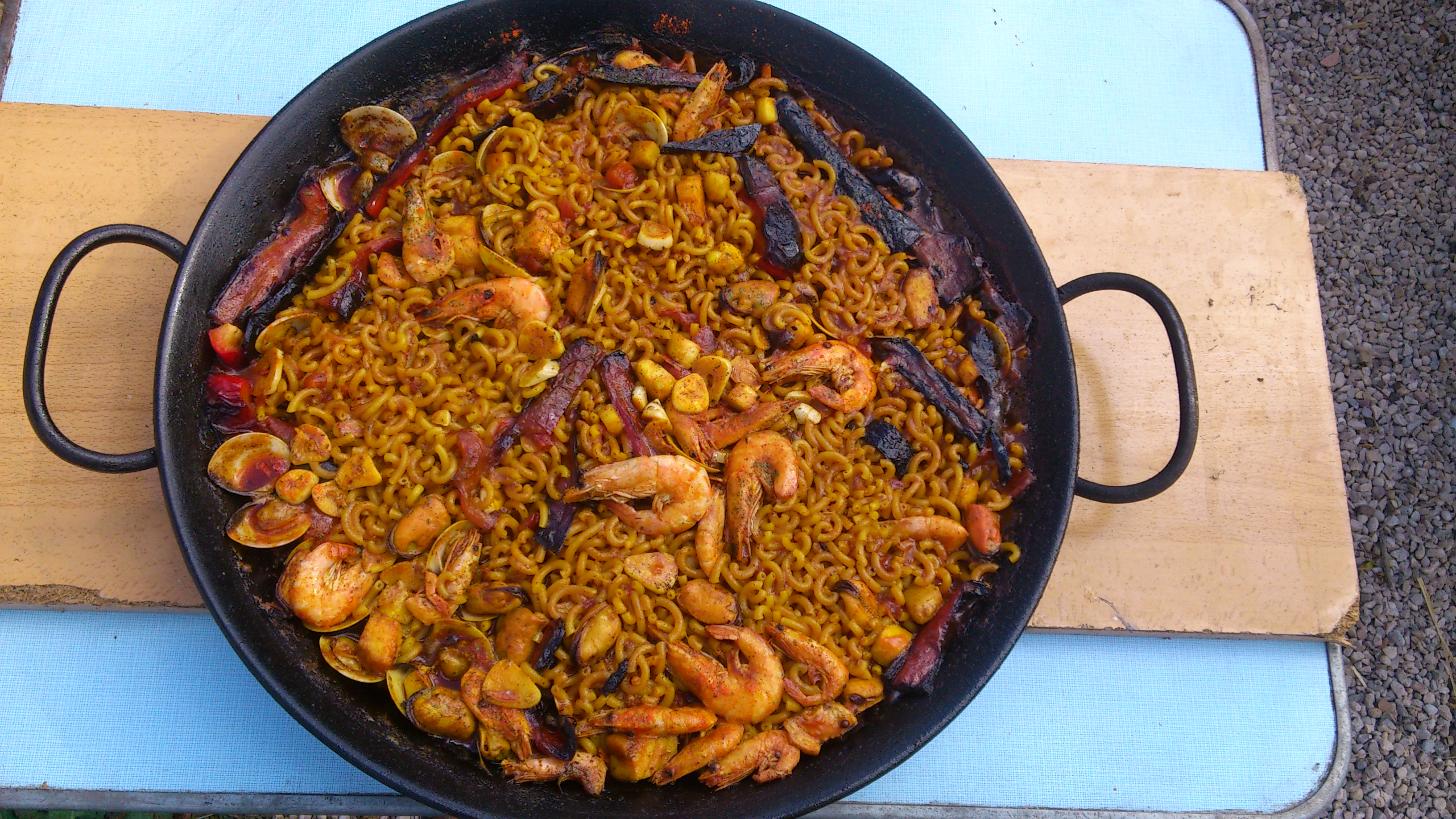 This is a recipe with another use of our broth. This time we made a Valencian fideuá using our broth EL CALDERO as the base, or background. We prepared a basic sauce for paella, with red peppers, tomato sauce, seafood to taste,  a bag of frozen seafood and that’s that! We added a jar of EL CALDERO by Caldos del Mediterráneo and three times the contents of the jar in water. Once boiling, we added 500g of fideuá to the broth, together with four garlic cloves. fideuá noodles for four garlic cloves into slices, food coloring, salt, parsley and a pinch of pepper. Delicious. 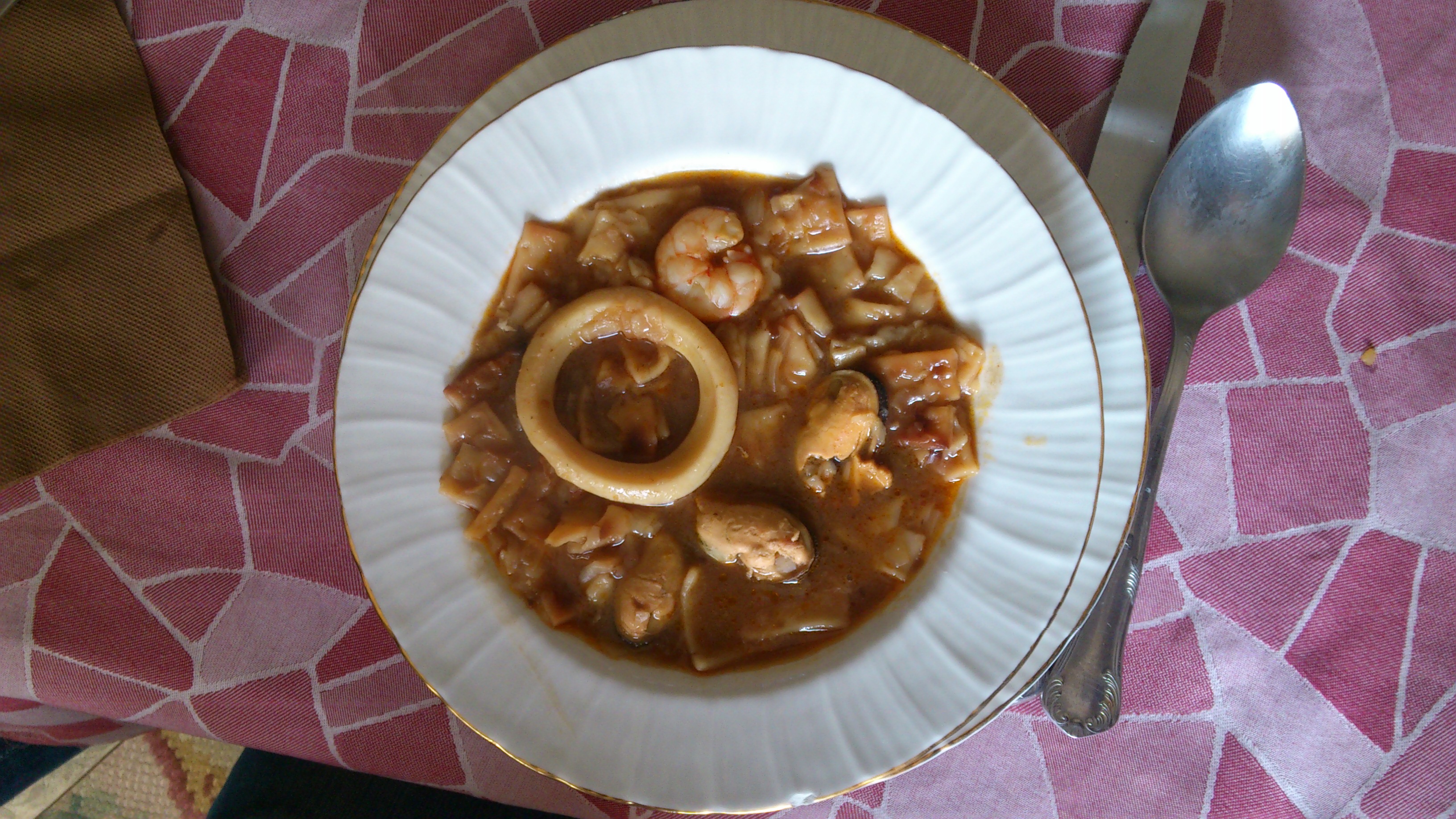 Now we present a quite original and tasty recipe for which we will use our broth as a base for a stew a bit like “gazpacho manchego”, only instead of meat, it’s made with fish and seafood. A simple recipe with ingredients that are readily available and ready to prepare in no time. You don’t need to be an expert cook or spend the morning in the kitchen.

Fry the onion. When it is well browned add the bay leaf and cayenne. Pour into the saucepan the contantes of EL CALDERO jar, refill with water and add, and repeat (two jars of water). When the broth is boiling add the squid, monkfish and grouper. After five minutes add the bread. Five minutes later add the remaining ingredients, stir, being careful not to break the cakes and allow to boil for five minutes. Turn off the heat, let rest a bit and enjoy.

The Caldero and company

Our “Caldero” is a traditional dish from the Mar Menor, in the Mediterranean area of Murcia. It has an intense taste and is difficult to make well. It was created by the fishermen in the area using rice and rock fish and with other local ingredients such as dried peppers, tomatoes, olive oil and garlic. Caldos Mediterráneo has recovered this historic recipe and brings it to your table home-made with natural ingredients, so that you can prepare it in the simplest way, with very little effort: boil, serve and enjoy. It’s never been easier to eat authentic caldero at home. Buy now at our online shop.